Nitanee Paris is originally from Pennsylvania where one of her earliest musical memories was of an urban neighborhood where at night the songs of an historic African American church, which was adjacent to her backyard, and was once part of the Underground Railroad, would echo against the hymns from a Puerto Rican church just across the street. While she loved the music, society dictated that she could only participate vicariously. “There was so much racism. It impacted the way I feel about the importance of diversity and tolerance and acceptance,” she recalls.

Early punk music, political messages, Woody Guthrie and Rage Against the Machine, as well classic country music that her father loved to play on his guitar: Nitanee absorbed a wide influence of diverse sounds and images. Her mother named her after a Native American legend of a strong and powerful leader of the Iroquois Confederacy. Later generations carried on the name, which also recalls a favorite Pennsylvania folktale of "Nitanee", whose forbidden lover still can be heard calling her name from the depths of Penn's Cave. And while her hometown was surrounded by the beautiful countryside that she loved, she was drawn to the artistic energy and exciting pace of Los Angeles. So Nitanee came west to California. 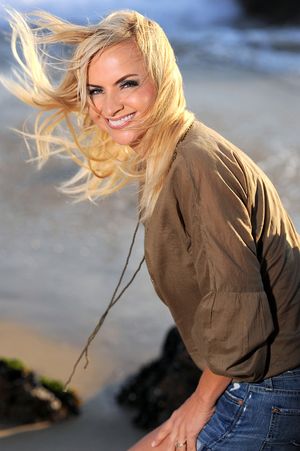 Paris' work has been licensed for The CW, PARAMOUNT, VIACOM/CBS, NETFLIX,  HULU, MTV,  VHI,  BRAVO,  & The HALLMARK CHANNEL, and has been placed in feature films, commercials, and corporate campaigns. TV Shows that have featured her songs include The CW's "Batwoman" and "Riverdale", BRAVO's  "Vanderpump Rules", NETFLIX's  "Selling Sunset", "Gentefied", "The Circle", and "Love Is Blind", MTV's  "Ex On The Beach",  VH1's  "Love and Hip Hop Hollywood",  MTV's  "Teen Mom 2" & "Teen Mom: Young & Pregnant", HULU'S "Maggie", "Will Play For Food",  the Mexican TV series  "El Juego De Las Llaves",  and  VH1's  "Love and Hip Hop New York".  Paris' work has been licensed for feature films including "Muffin Top: A Love Story", "Plan V", "Matching Hearts", and "Paul's Promise". She also composes original music for advertising, and her work has been placed in multiple commercials for Dignity Health's "Hello Human Kindness" campaign, and has been licensed for Apple Fitness and Peloton.

Paris recently received 8 nominations in the 2020 Peace Song Awards, and is the winner of the County/Folk Category. In 2020 and 2019 she has received a total of 11 nominations and won 3 awards in multiple categories. Her winning song, "Keep The Light On", is about being there for others in times of darkness, and "Sanctuary" was inspired by the brave heroes fighting human trafficking. She is also the recipient of two Posi Awards (Positive Music Awards), one in 2019, and another in 2020 for "Take The Leap", a song about hope in the face of fear. Paris recently won the 2021 Grand Prize Award in the Electronic Category of the John Lennon Songwriting Contest for her song "Traveler", and earlier this year, she won the Grand Prize Award in the World Category for "Kokoro no Kakera”, the Japanese version of “Scars (Kintsugi)”.This is her 3rd Grand Prize win in the prestigious competition. She also one the Lennon Award in 2018 for her song "No Place Like Home". Paris has earned recognition from the International Acoustic Music Awards, the American Songwriter Magazine Lyric Contest, the Dallas Songwriters Association, the UK Songwriting Contest, the Songwriters Association of Washington, the Mid-Atlantic Songwriters Association, the Australian Songwriters Association, Women of Substance Radio, the NSAI Spring Training/Tin Pan South Songwriters Festival, and many other accolades. She earned six “Outstanding Achievement in Songwriting” awards from the Great American Song Contest, and she won Song of the Year from West Coast Songwriters for her song “Angels Like You”, and multiple awards for her Americana song “Coal Dust”.

Nitanee Paris contributes her energies to an expansive musical community. As a networking mentor, her talents are in making introductions, fostering relationships, organizing events and promoting causes. A Malibu, California resident, Nitanee envisions and hosts workshops and a full slate of networking and charitable endeavors and songwriting events. She brings her varied talents to her company, ArtistMax, where she is Partner and Director of Artist & Repertoire. ArtistMax is a Los Angeles based artist development and education enterprise founded by Grammy Award-Winning producer Ken Caillat (Fleetwood Mac; Colbie Caillat).

Paris is on the Board of Directors of the Hawaii Songwriting Festival and the staff of the Durango Songwriters Expo. She is also on the SongArts committee for the Society of Composers and Lyricists (SCL), and the judging panel of the InterContinental Music Awards, and she is the founder of the Malibu Chapter of the Nashville Songwriters Association International (NSAI), where she oversees a busy calendar of monthly opportunities. Sge is a regular speaker She produces "Nitanee's Nashville Nights" in Los Angeles, a showcase for hit songwriters and local talent and she hosts songwriting retreats, including a castle retreat in Macon, France, where she directs songwriting workshops. Paris hosts charity benefit showcases for a number of causes, including human trafficking organizations Rock Against Trafficking and the Coalition to Abolish Slavery and Trafficking.

Paris has been a panel speaker and mentor at the Hawaii Songwriting Festival on the Big Island of Hawai’i, and at Songwriting Camps in Palms Springs, CA hosted by Richard Harris & Pam Sheyne, the Society of Composers and Lyricists SongArts Committee, and at teh NAMM Show, in addition to being guest instructor at Mariposa School of Global Education, and at ArtistMax workshops at the Village Studios in West Los Angeles, and other songwriting and sync music conferences including Sync or Swim, Sync Fiesta, and Balanced Breakfast. Paris created the Malibu Teen Songwriters, where she provides collaboration opportunities and confidence building exercises for writers ages 13-18.

For Nitanee Paris, it is all about forward motion, assisting and encouraging others, and being a powerful and positive force in promoting her community. “Camaraderie and partnership” she says. “It is so important that we all help each other”.